This project served as a capstone for the “Learn SQL for Data Science Specialization” on Coursera. The original task was to create a report for a fictional company named “Lobbyists4America” based on tweets from politicians between the years 2008 and 2017.

As no more details regarding the task were given, I decided that the goal of my project will be to develop a general understanding of the political landscape in the US. I will identify both relationships between politicians and attitudes of politicians towards key topics. Apart from helping voters get a better idea of their politicians’ convicitions, it will support (fictional) lobbyists in determining how to best allocate resources. Trying to get a piece of legislation to pass, the lobbyist can e.g. use this analysis to identify which politicians need to be swayed and which politicians have the largest influence on their colleagues.

The main challenge during this analysis was the lack of data regarding party membership as well as office being held by the inviduals behind the twitter accounts. This problem was resolved in a four tier approach: 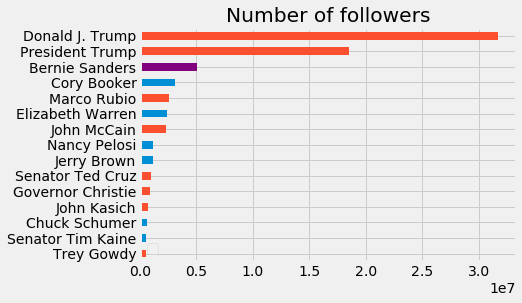 Donald Trump has the largest number of followers; in fact he has more followers than all Democrats and Republicans combined. 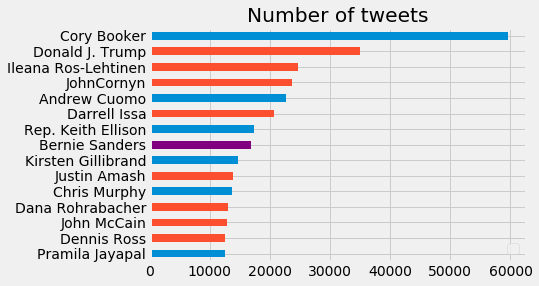 However, in number of likes (aka favorites) per tweet he does not make it to the top 15 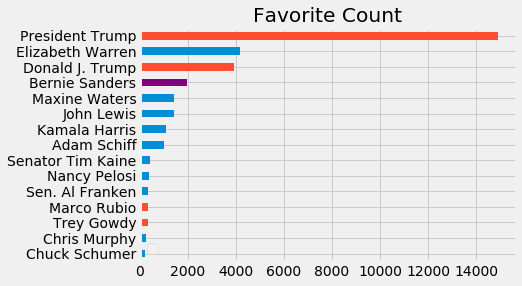 Using this model we can identify over- and underperfomers. Here are the top and bottom ten performers: 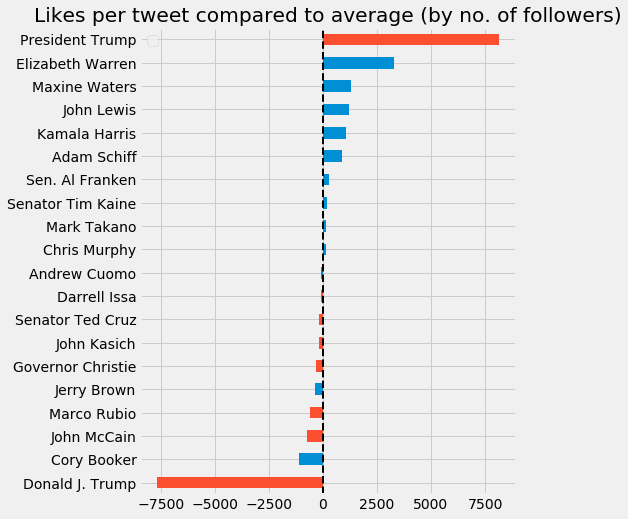 On a party level it seems like Democrats perform better on average than Republicans: 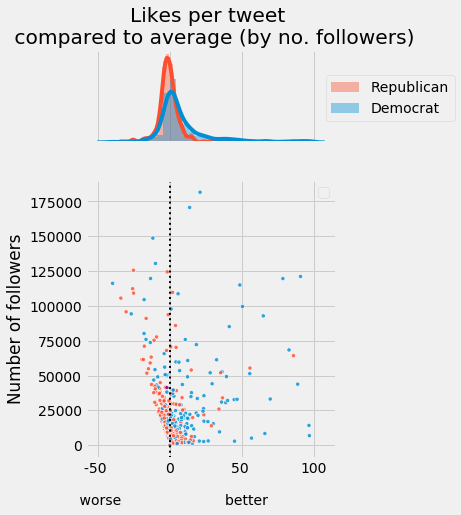 Indeed a two-sample hypotheses test using non-parametric bootstrap reveals that Democrats have on average 10 more likes per tweet as expected by their number of followers ($p < 10^{-5}$, 95% confidence interval: (6,13)) 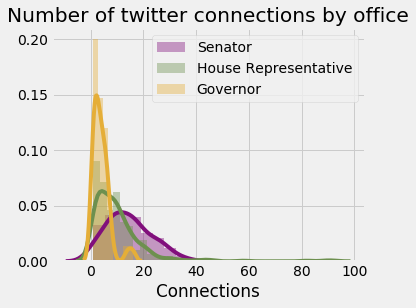 Analyzing the sentiment of these connections (-1: most negative sentiment, +1 most positive sentiment), I find that inner-party relationships are slightly more positive than those across party lines (Average deviation: 0.054 (0.003,0.104), P-value: 0.0412) 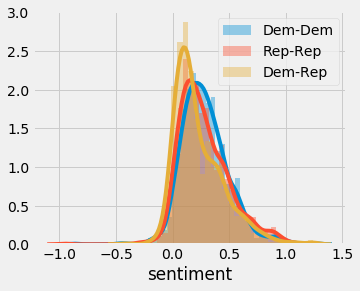 From the network graph shown below we can infer several things. Senators (shown with bold borders) seem to cluster, which means that they form stronger networks with other Senators. Using the graph interactively we can identify which politicians communicate more across party lines. These are the ones closer to the boundary between Republicans and Democrats. We can further see that both Bernie Sanders and maybe more surprisingly Donald Trump is surrounded by mostly Democrats.

For simplicity we only use hashtags to attach a topic to given tweet. Interestingly, only 1% of distinct hashtags make up about 50% of all usages of hashtags in this corpus: 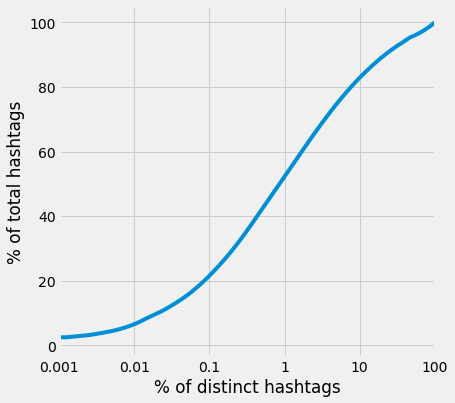 Here is an overview of these hashtags: 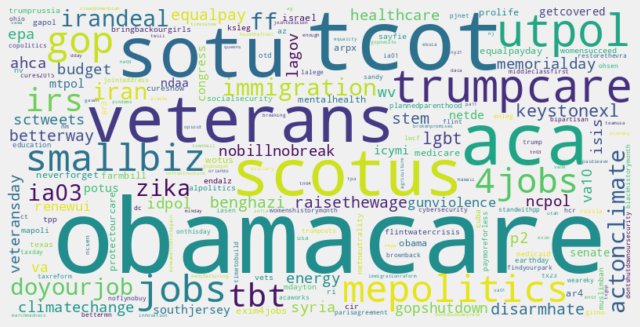 I picked “Obamacare/ACA” and “Immigration” for further analysis. It should be noted that sentiments reported should be taken with a grain of salt, as they gauge the tone of a given tweet and not necessarily the opinion of a politician towards a topic. For example “The best case against #Obamacare is proving to be Obamacare itself” is certainly coming from a politician opposed to the affordable care act but will be counted a having a positive sentiment because of the occurrence of the word “best”. Therefore a more reliable measure may be to simply look about the tweet frequency about a given topic and split by keywords such as “repeal” for Obamacare and “reform” for immigration. 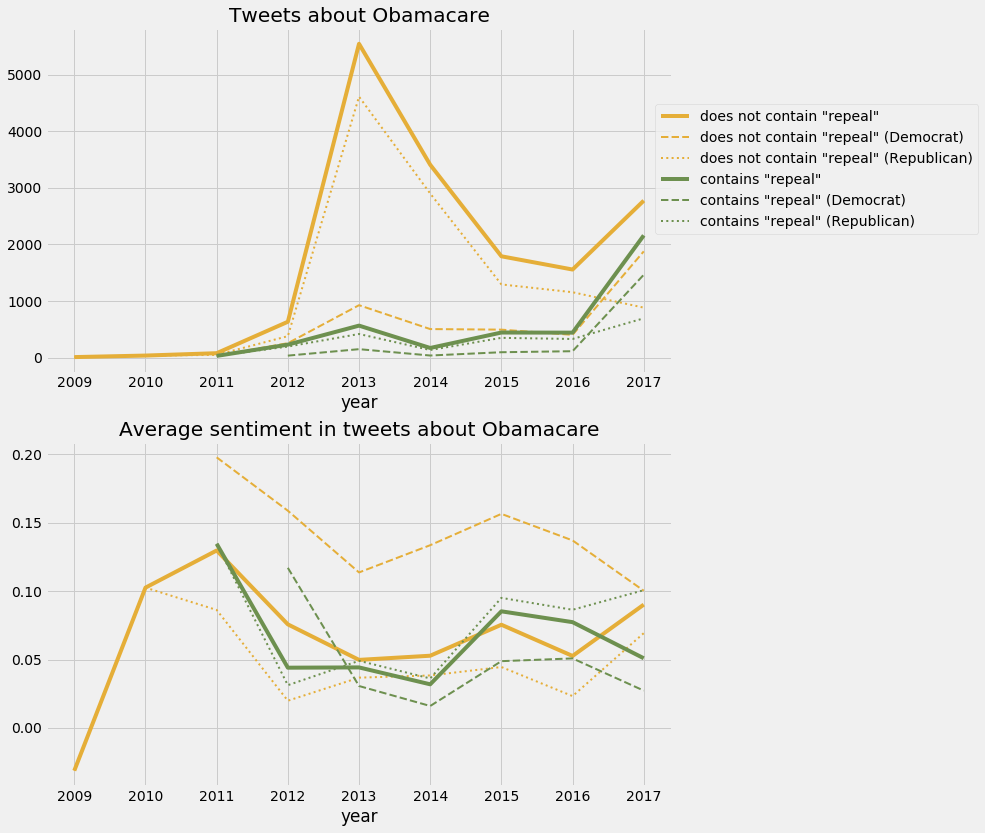 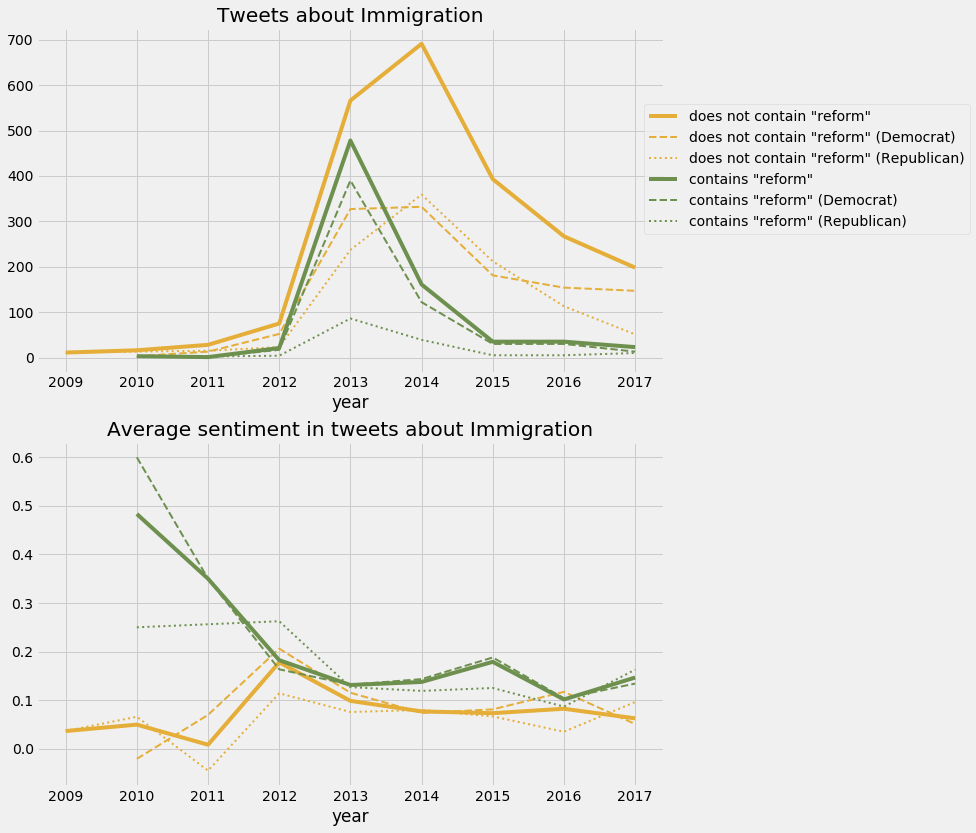 I have identified which politicians have the largest platform, both among their colleagues and their followers. Moving forward, I would recommend Lobbyists4America (the fictional company this report was geared towards) focus on politicians who are both popular among their followers (many followers + more likes per tweet than expected) and have a strong network of fellow politicians. An investment into these key-players should pay off as their opinion towards a policy/topic will quickly propagate. Given the vast number of politicians included in this dataset I have often resorted to presenting only the top and bottom precentiles. In the future it might be helpful to have an interactive dashboard that stakeholders can use to browse/analyze the dataset themselves.